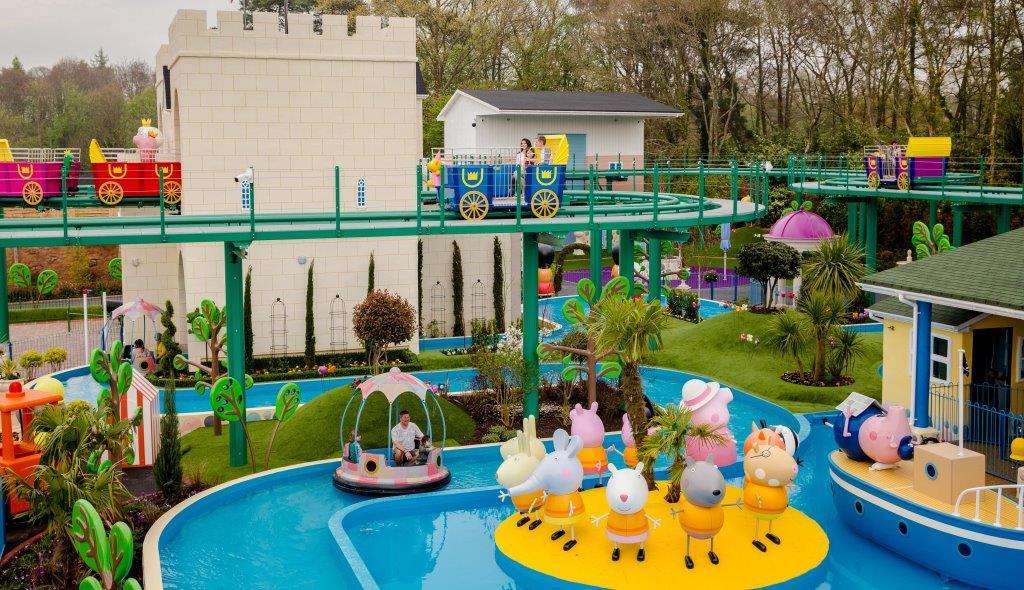 Paultons Park – home to the UK and Eire exclusive Peppa Pig World has launched two new rides at the expanded attraction for the first time since opening, following a star-studded Grand Preview event.

The Queen’s Flying Coach Ride and Grampy Rabbit’s Sailing Club are now open to be enjoyed by the public at the Hampshire-based theme park.

Ahead of its opening day, Paultons Park hosted a Grand Preview event to celebrate the completion of the two new rides and the red carpet was rolled out for a host of celebrity names including Tamara Ecclestone, Rochelle Humes and Charlotte Hawkins. Friends of Entertainment One’s (eOne) popular preschool brand were also in attendance including the co-creators of the animated television series, Neville Astley and Mark Baker.

The Queen’s Flying Coach Ride, just one of the new rides at Peppa Pig World, takes families of all ages on an unforgettable tour of the newly expanded attraction in coaches that are transported by monorail. The ride starts from the top of the Queen’s Castle, another addition and new signature point of the attraction, which offers an impressive bird’s-eye view of the park. Children and parents can also hop aboard boats at Grampy Rabbit’s Sailing Club, where they can cruise along the new water route around the base of the Queen’s Castle, and discover Pirate Island.

Stephen Lorton, commercial director at Paultons Park, said: “Peppa Pig World has continued to grow in popularity since opening in 2011 and the additional two new rides will continue to add to its success for many years to come. Paultons Park’s significant investment behind the expansion has created increased capacity, a new eatery, as well as the two new rides that offer panoramic views of this popular family destination. Both rides are suitable for young children of all ages accompanied by a parent, providing fun for all the family.”

Katie Rollings, SVP UK Licensing at Entertainment One, said: “Peppa Pig World is a must-see destination for fans and offers a delightful opportunity for families to step inside the magical, colourful world of Peppa Pig. The two new themed rides perfectly complement the existing attraction and are a wonderful addition. Fans will also be pleased to see new characters who were introduced to the hit TV series after the attraction originally opened.”

The Queen’s Flying Coach Ride and Grampy Rabbit’s Sailing Club are now open to the public and based at Paultons Park – home of Peppa Pig World.

For further information about Paultons Park including opening times and to book tickets online in advance, visit:  paultonspark.co.uk .

Family-run theme park Paultons Park opened in 1983. The park covers 140 acres and has more than 70 rides and attractions including Jurassic-themed attraction Lost Kingdom, which saw the park have a record-breaking year in terms of footfall when it opened in 2016.

The Company’s rights library is exploited across all media formats and includes more than 80,000 hours of film and television content and approximately 40,000 music tracks.