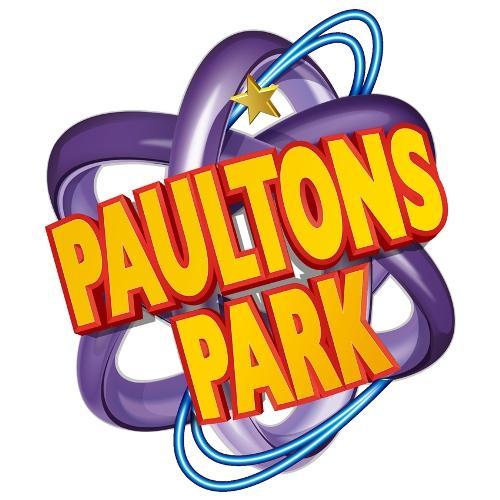 Did you know that a person who studies dinosaurs is called a Palaeontologist? I didn’t know this until recently and now I quite fancy myself as a bit of a Paleon…..what do you call them again? Anyway, ever since Lost Kingdom launched at Paultons Park in May 2016, I have become fascinated with dinosaurs and have been rigorously studying them for weeks now.

Dinosaurs roamed the earth 180 million years ago, (that’s a very long time ago) and ruled the earth for a staggering 160 million years! To my amazement, I recently found out that the dinosaurs didn’t all live at the same time (even I don’t know everything) and that dinosaurs like the Stegosaurus had already been extinct for approximately 80 million years before the dinosaur the fierce T-Rex! In fact, the time separating Stegosaurus and Tyrannosaurus is greater than the time separating Tyrannosaurus and you. Wow!

I’m going to give you a short guide to some of my favourite dinosaurs that you can see when you visit Lost Kingdom. 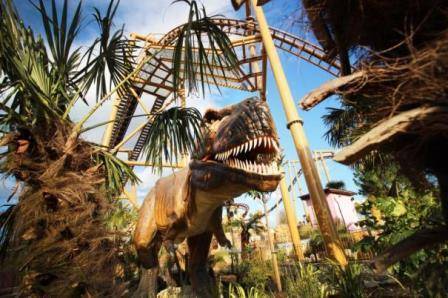 Let’s start with one of the fiercest and most well-known of the dinosaurs, the Tyrannosaurus-Rex (T-rex)! A lone hunter, this dinosaur was the length of a bus and twice the weight of an elephant. This fearsome carnivore would use its powerful jaw and its 8 inch long teeth to rip its prey apart- its bite was 3 times as powerful as a lions! No wonder it’s one of the most well-known meat eating dinosaurs ever!! 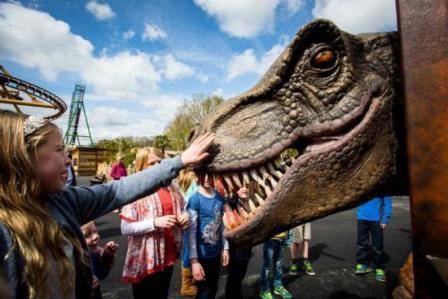 You can get up close to the parks Tame(ish) T-rex Max with your school on an education visit.

Velociraptor
These carnivores are actually a lot smaller than you see in the movies! A raptor is believed to be the size of a turkey and top scientists even believed that they had feathers! So when trying to imagine a Raptor, it is probably best to picture some sort of turkey you eat at Christmas- but a carnivorous one with long teeth and vicious claws…. Scary!! Not something I would want to come across in a hurry! 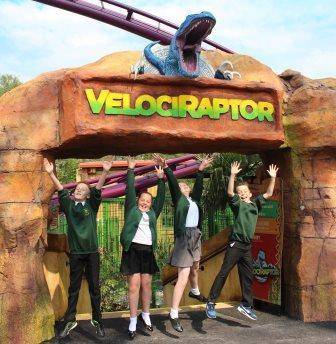 Velociraptor actually means speedy thief or quick plunderer and this is a very suitable name for these clever hunters. These formidable predators hunted in packs and could reach speeds of up to 40mph. Funnily enough; the Velociraptor rollercoaster at Paultons Park reaches this top speed as well! You can really imagine how fast they ran when you ride this rapid rollercoaster. Crikey!

Pterosaur
Despite their wings and dinosaur-like appearance, these creatures were neither birds nor dinosaurs. In fact, pterosaurs were winged reptiles closely related to dinosaurs. Dinosaurs have limbs under their body but pterosaurs (like lizards and crocodiles) have limbs that stick out from the sides of their bodies. This is one feature that separates the Pterosaurs from the Dinosaurs.
Pterosaurs could be as large as F-16 fighter jets or as small as paper planes and they were the first animals to fly except insects. Weirdly enough, they have no relationship to insects or birds though. Truly puzzling! 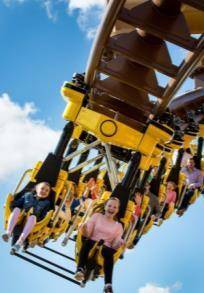 Pterosaurs were able to fly because they had hollow bones which made them light (hollow means empty). This made it easy to soar through the air looking for food and avoiding predators.
Most pterosaurs were fish eaters although scientists believe that some may have eaten small insects and small animals. Unfortunately for the Pterosaur, it would have itself been hunted by larger meat-eating dinosaurs and would have had to look out constantly for predators.

Argentinosaurus
Now, not all dinosaurs were meat-eating menaces, some were very peaceful plant eaters just like the Argentinosaurus. This was the heaviest and tallest land animal to ever have existed! 37 metres in height and weighing in at 100 tons, this dinosaur roamed the earth 100 million years ago!
Scientists believe that this dinosaur moved in herds of around 20 and that its long neck was perfect for picking leaves from the tallest trees- a bit like a giraffe.

Not a lot is known about this dinosaur because only a few fossils have been found and studied. A whole skeleton was discovered in Argentina and this is where it name originates. 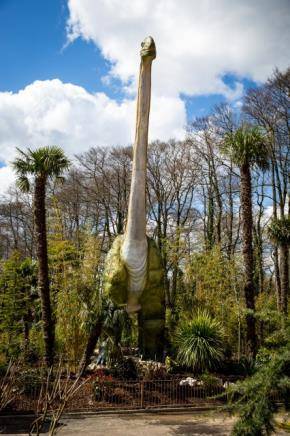 Stegosaurus
A nice slow moving plant-eating dinosaur is next on our list. I say ‘nice’ but they still had 2-3 foot long spikes on the end of their tails! These were used for defence as these dinosaurs were often preyed upon by larger carnivorous dinosaurs. They could only reach speeds of 5mph so they would not have been able to out run predators but the spiky tail was very off-putting to other dinosaurs. I would not want to be hit by one those-ouch!
The Stegosaurus was roughly the size of a bus and had 17 long plates on its back to protect it. Despite its large size, its brain was only the size of walnut! 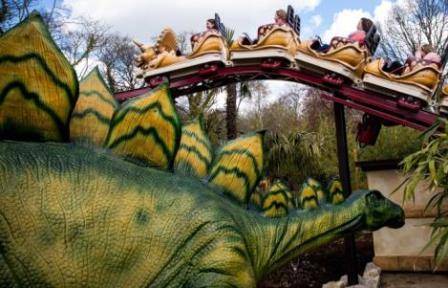 So there you have it. A very brief guide to some of my favourite dinosaurs at Lost Kingdom. Now I must get on, I have been invited to a dinosaur excavation in the desert somewhere….! Best get packing. 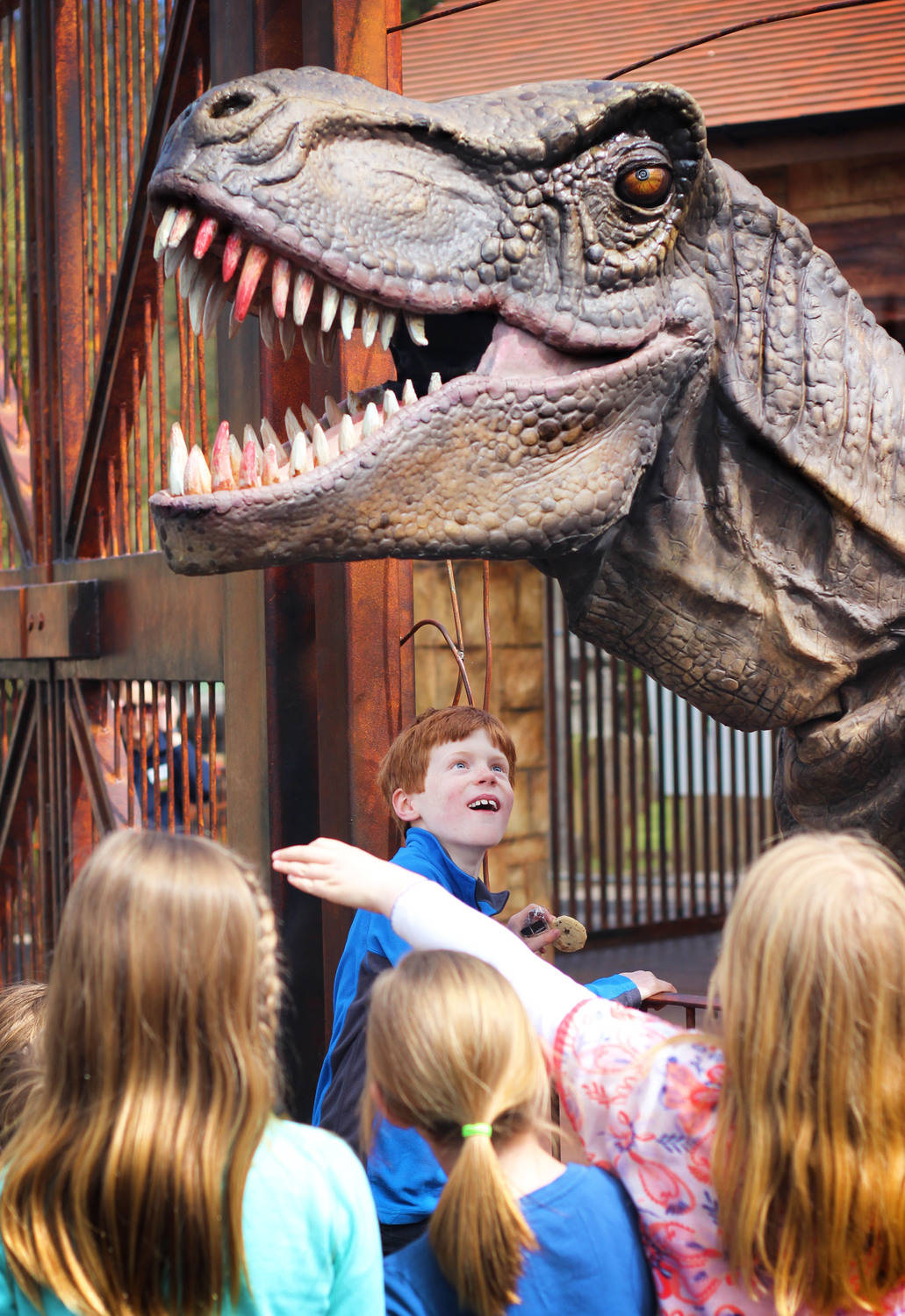 Lost Kingdom is now fully open and ready for your school to visit! I hope you’ll find it as fascinating as I do.
Oh, just one more thing, find out more fascinating facts about dinosaurs before you visit us.