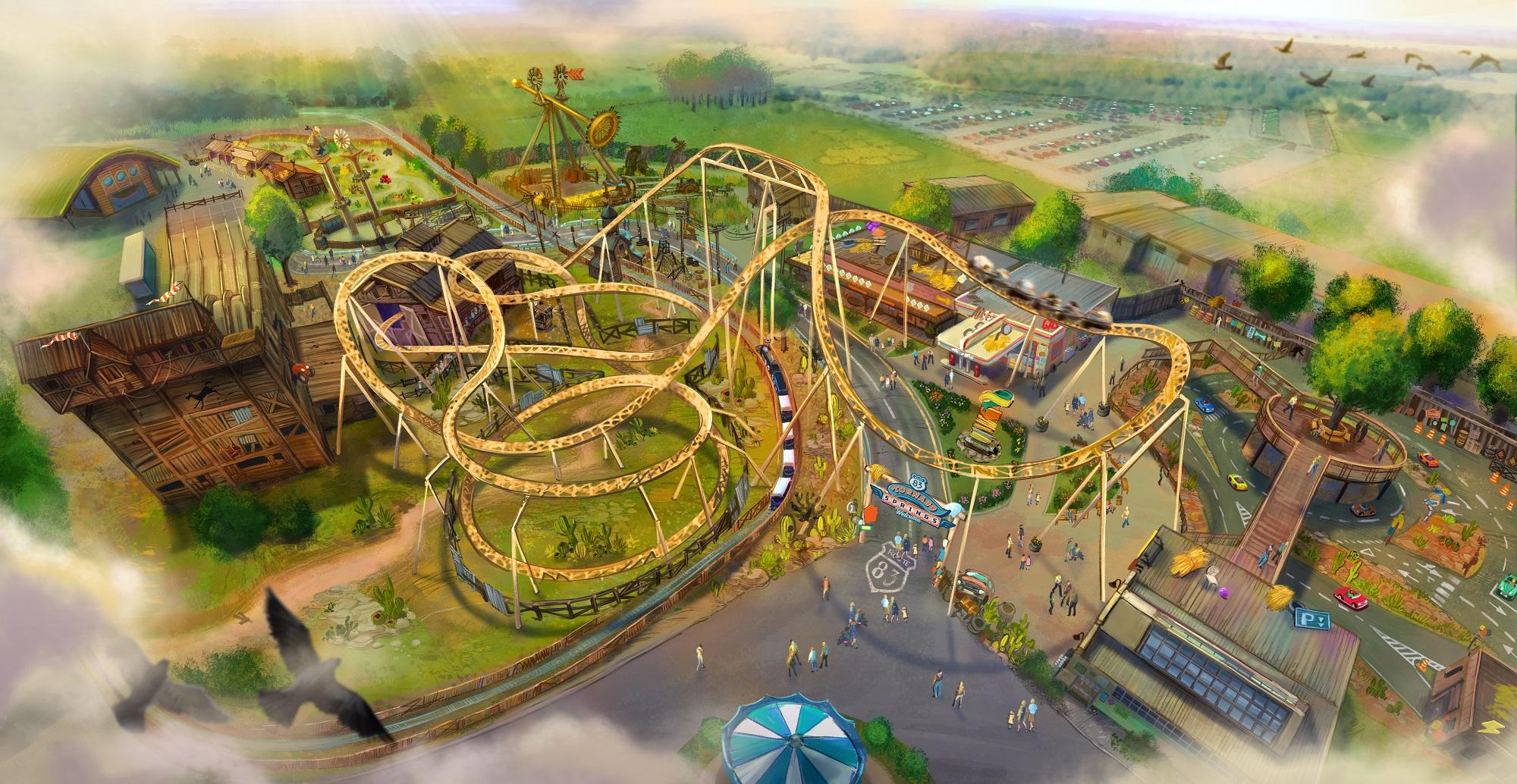 The UK’s number one family theme park, Paultons Park, has announced details of a major new world of attractions which will open to the public next year.

Tornado Springs’ is a creative imagining of a Midwest desert resort town set in the American heyday of the 1950’s covering over four acres and featuring over eight different rides and attractions. The concept has been developed exclusively by Paultons Park and is designed to appeal to a wide range of ages from 3 to 14, consolidating the park’s position as the top family leisure destination in the UK.

Paultons Park, which is set in 140 acres of parkland on the edge of the New Forest in Hampshire, holds TripAdvisor’s best-rated UK amusement park award – and the distinction of being the only theme park to have received this award three years running.

James Mancey, Operations Director of Paultons Park, said: “We are extremely excited to bring Tornado Springs to the public next May. The new themed world represents the single largest and most ambitious investment in the future of Paultons Park since we opened in 1983. The Tornado Springs concept is unique to Paultons Park and will significantly extend our capacity to entertain and delight children of all ages.”

Tornado Springs has been developed to offer true cross-generational appeal, with the 1950’s Americana theme resonating across the generations. Due to the enduring popularity of the era and films such as Grease and Back To The Future, it’s anticipated that Tornado Springs will prove to be a crowd-pleaser for parents as well as children.

The new attractions set to launch at Tornado Springs include the Storm Chaser rollercoaster – a free spinning ride, taking trains of carriages to an exhilarating height of 20 metres above ground. Storm Chaser will be the only rollercoaster of its type in the UK, creating a unique draw for rollercoaster-loving families from across the UK.

The Cyclonator – a Gyro Swing spinning pendulum ride, carrying 30 riders at a time and rising to around 25 metres – is expected to become the most thrilling ride at Paultons Park. Cyclonator, which will be themed as a wind-powered invention by the townspeople characters of Tornado Springs, developed to scythe their crops – is just one example of the incredibly detailed theming being created by Paultons Park. Thanks to its memorable characters, intricately finished styling and even its own radio station, Tornado Springs is set to immerse visitors in a fantastic and wholly believable world.

Tornado Springs will also feature Al’s Auto Academy – a garage-themed driving school ride with 30 electric cars, which uniquely gives parents the opportunity to hop on board and help guide more novice younger drivers around the track – while slightly older children can take a classic American car out for a spin by themselves.  Two exciting Windmill Towers family drop rides, the Buffalo Falls water raft ride, and Trekking Tractors will complete the line-up of rides available at Tornado Springs.

James Mancey added: “We felt that the theming of Tornado Springs was a natural fit with the traditional family values with which Paultons Park is synonymous. We’ve coupled the vibrant appeal and charm of the 1950’s era with best-in-class rides and attractions to create a truly unique world which, in association with our existing fantastic themed lands, will stand head and shoulders above any other family attraction in the UK.”

Tornado Springs will become the fifth themed world at Paultons Park, joining the UK exclusive Peppa Pig World, Critter Creek, Little Africa and the Jurassic-themed attraction of Lost Kingdom.  Paultons Park is currently open daily from 10am, and new for 2019 is the amazing Jungle Adventure Show, featuring a chance to meet and greet meerkats, snakes and lizards!